In most joints principles of movement and joint function are relatively easy to picture and understand. However, in the sacroiliac (SI) joint, mechanics and function are more complex. Yet, it is still important to comprehend how the joint works in order to accurately evaluate function or pathological problems.

There is very little motion that occurs at the SI joint, but the most important motion that does occur is a slight back and forth rocking motion of the sacrum in the sagittal plane. The importance of this motion will be explained shortly. Most motions that occur in the sagittal plane are called flexion or extension. However, there are a few that don’t use these names and those at the SI joint don’t.

Sagittal plane motion at the SI joint is called either nutation or counternutation. The word nutation means to nod and is similar to the concept of the slight tilting or nodding of the earth on its axis as described in astronomy. Counternutation is simply movement in the opposite direction. Nutation is defined as a relative anterior tilt of the sacral base (upper flat surface of the sacrum that articulates with L5) in relation to the ilium (Figure 1). It is described as a relative movement because it can occur with the sacrum rotating anteriorly, the ilium rotating posteriorly, (or both). 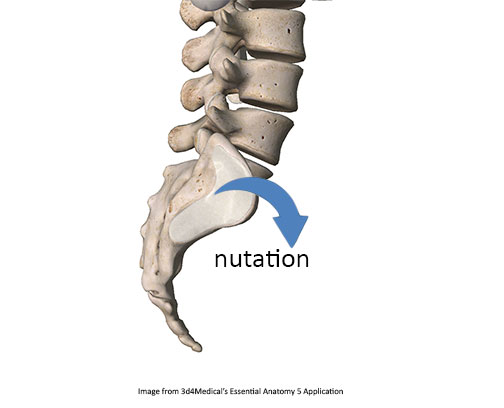 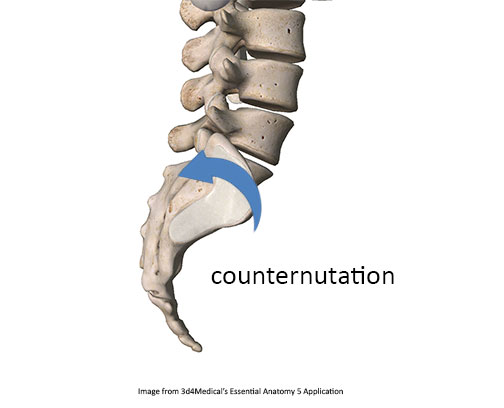 These motions are essential for proper movement because of the unique demands placed on the pelvis during locomotion. For example, during walking one leg is in flexion and the other is in extension. It would be difficult for this motion to occur if there was not some ability for each innominate (ilium, ischium & pubis on one side) to rotate independently of the other. Therefore there may be some degree of relative nutation on one side and counternutation on the other.

There are several muscles whose contraction tension can increase nutation at the SI joint. The rectus abdominis will pull the pubic symphysis in an anterior direction and tilt the innominates posteriorly in relation to the sacrum. The erector spinae pull on the lower sacrum so that the upper portion is rotating anteriorly. The hamstrings pull the ischial tuberosities inferiorly so that the innominates rotate posteriorly in relation to the sacrum. All these combined motions will lead to increased nutation and may help stabilize the SI joint. The forces created by these muscular contractions will also stretch the sacrotuberous and sacrospinous ligaments. Stretching of these ligaments will further compress the articular surfaces at the SI joint and this increases the stability of the joint.

One reason this entire kinetic chain is key for the massage therapist to understand is that tension in these muscles may cause an undue amount of compression at the SI joint and lead to SI joint pathology. If these muscles are hypertonic, the SI joint may be held in too much nutation and not allowed proper counternutation movement. Treatment of SI joint dysfunction should include addressing hypertonicity in these muscles as a possible component since hypertonicity in them may create a lack of proper nutation and counternutation.