Low back pain is a pervasive problem that plagues a huge percentage of the population. Researchers and clinicians have sought for years to find the key causes of low back pain, yet there is still a great deal of uncertainty around the causes for many back pain complaints.

One of the frequent causes given for low back pain is a leg-length discrepancy (LLD). A LLD can be caused by muscle tightness and imbalance. This type of LLD is called a functional LLD because it results from muscular activity. The most common culprit for a functional LLD is tightness in the quadratus lumborum on the side that appears shorter.

Less commonly, a LLD can be caused by an actual difference in the length of bones (femur or tibia). When there is a true length difference between bones, this is referred to as a structural LLD. If the bones one side are longer than the other, it will cause a tilting of the pelvis where the pelvis is higher on the side with the longer bone(s).

There are several ways in which a LLD can contribute to low back pain. In either a functional or structural LLD there is a resultant lateral pelvic tilt. Along with the lateral pelvic tilt there will be a shortening of lateral flexor muscles such as the quadratus lumborum on the high side of the pelvis. There will also be increased compressive forces on the facet joints on the side that has the higher pelvic position. Because of lateral flexion of the lumbar spine there can also be decreased space of the intervertebral foramen on that concave side of the lumbar spinal curve. Decreased space in the intervertebral foramen can lead to an increase in nerve root compression as well.

Numerous clinical resources describe LLD as a primary factor in low back pain. However, clinical research studies have not been conclusive in pointing to LLD as a true causative factor of low back pain. The authors of this study suggest that one of the main reasons for this inconsistency is inaccurate means of measuring a LLD.

There are a number of different ways to measure a suspected LLD. The most simplistic involve visual examination by putting a client in a supine position, grabbing the ankles, applying traction, and visually inspecting the placement of each medial malleolus in relation to the other. Another common clinical investigation involves the use of a tape measure to measure the length of the bones. For many years the most accurate means of measurement has been through full lower extremity x-ray. However, this method is not used often and is discouraged because of the significant cost and the amount of radiation exposure required for this investigation.

The authors in this study used a unique measurement method involving ultrasound and laser calculation. A previous study they had published had found an excellent degree of agreement with radiographic results indicating this testing method could be a valuable alternative for helping to identify LLD. The ultrasound and laser calculation method does not have any of the detrimental physiological effects of the x-ray examination, and is much less expensive to perform.

The study consisted of 148 participants; 114 were pork meat cutters and 34 were customer service workers. After taking measurements of structural leg length for all participants they divided them into three different categories those with a LLD of 0 to 5 mm a second group with a discrepancy of 6 to 10 mm, and a third group with the discrepancy over 10 mm.

Several different parameters were investigated to determine the correlation between low back pain and LLD within each group. For those meat cutters that had to stand all day, the greater was their LLD, the greater were the number of days they reported low back pain. 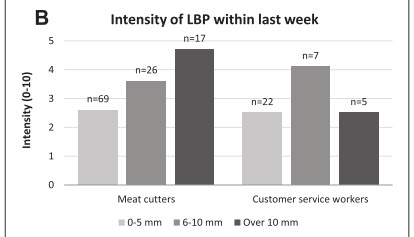 Analysis:
The authors state that in their study a LLD of 6 mm or more was associated with an increased likelihood of low back symptoms among those who were standing for their work. As a result indicated, there did not seem to be a correlation between low back pain and LLD in those who were sedentary office workers. This would indicate that the weight-bearing position has a strong contribution to exacerbating low back pain symptoms when there is a LLD.

The authors note that some of these findings are contrary to what has been found in previous studies and most likely this is because of high variability in the way in which LLD was measured as well as the potential study populations that were used in those other investigations.

The authors hypothesize that the mechanism by which low back pain is caused by LLD is not clear, however some of those possible causes mentioned earlier in this review are likely to be a factor.

The authors mentioned that a potential weakness in this existing study is the small number of participants, especially those sedentary customer service workers. Other factors of work positions in those workers might have contributed to a decrease in low back pain as well.

Another weakness that the authors did not mention at all is that they did not make a distinction between functional and structural LLD. It seemed as if there was an assumption that all LLDs were structural and therefore the only measurement method was one which investigated the discrepancy between length of bones on each side.

The key take away from this study is that structural LLDs do appear to play a prominent role in low back pain. Soft-tissue work can be helpful to address other muscular compensations, but it may also be necessary for the individual to address treatment options such as shoe inserts or something that can compensate for the actual bone length discrepancy.