Nerve compression is a recognized cause of soft-tissue pain and disability for many. Nerve compression syndromes, and especially upper extremity nerve disorders, came to the forefront in the last few decades as a result of increasing injuries among those whose occupations require repetitive activities. Carpal tunnel syndrome (CTS)  is the most well-known of the upper extremity nerve disorders. However, there are at least 5 other locations along the median nerve which can lead to pain and disability.

Becoming familiar with the anatomy, assessment, and treatment of the full length of the median nerve can help to prevent or resolve these issues in your clients. Physical assessment is still at the core of most nerve disorder evaluation. The upper limb neurodynamic tests (UNLT) can assist in determining what section of the nerve may be impaired or have issues. Like other special tests which have varying degrees of accuracy (sensitivity and specificity), it is best used in conjunction with a comprehensive evaluation, rather than relied on as a sole assessment tool.

Today, we have more information about nerves and how they function than any time previously. This article explores some of the advances that have been made in nerve treatment, then looks at the ULNT#1 testing procedure and its role in median nerve pain.

Nerve compression disorders are often perceived as a biomechanical problem involving static pressure on a nerve in a specific location. While this certainly can occur, this model ignores one of the most important facets of the nervous system- the fact that nerves must be able to move, and restriction of their movement is at the root of many nerve-related pain complaints.

For years, focus had been placed on localized nerve compression syndromes. Not as much attention was paid to the need for free and healthy movement of nerves until the publication of David Butler’s groundbreaking book, Mobilisation of the Nervous System in 1991.1 Butler is an Australian physiotherapist whose body of work and publications were some of the very first to shine light on the unique biomechanical properties of the nervous system.

So what does ‘movement of the nervous system’ mean? As the result of normal movement, tissues throughout our body are moved along with the motion of the bones. While some tissues, like muscles, are able to extend and stretch, other tissues must adapt by sliding and gliding through tunnels, against adjacent structures, and around joints during movement.

Subsequent to Butler, the term neurodynamics was adopted and is more frequently used to describe this aspect of neural tissue movement. These concepts are also explored in great detail in another excellent clinical text called, Clinical Neurodynamics, by Michael Shacklock.2

Understanding more about neural movement (neurodynamics) is essential for those working with nerve-related disorders. There are two key biomechanical forces that cause mechanical injury to peripheral nerves: compression and tension (note that the term mechanical injury is used to differentiate mechanical causes of nerve dysfunction from those of other systemic disorders like diabetes or multiple sclerosis).

The other form of neurodynamic stress is tension, and it is much less frequently recognized. Tension forces on a nerve indicate that the nerve tissue is being pulled. All soft tissues are subject to compression and tension forces, but some are more resilient to them than others. For example, muscle tissue can easily withstand tension forces because the muscle has such a high degree of elasticity. Nerve tissue, on the other hand, does not stretch, so when tension forces are applied to it, significant nerve dysfunction can result.

There are several anatomical locations where nerve tissue is highly susceptible to excess tension forces. These locations include:

One of the most challenging facets of nerve compression and tension disorders is identifying where the primary problem is occurring. There are no high-tech diagnostic tests that have proven reliable and effective in identifying key locations of mechanical nerve stress. As a result, detailed clinical examination in its fullest sense is still the most valuable for assessing these disorders. It is important to incorporate information from history, palpation and other basic physical examination procedures, such as range-of-motion and resistance testing when examining for nerve involvement.

Most upper extremity nerve dysfunctions are perceived as localized compression disorders like carpal tunnel syndrome. Yet, nerve disorders can occur in other locations and which are not a specifically named condition. For example, scar tissue from an injury can bind a nerve to adjacent structures limiting its mobility and causing nerve-related symptoms like pain, burning, or tingling.

Applying neurodynamics concepts gives you more information about areas of restriction so your treatment can be applied to the most affected region. Neurodynamics principles are also useful in treatment, for improving neural mobility.

The upper limb neurodynamics tests (ULNTs) can prove helpful for locating nerve dysfunction in the upper extremity.3,4 These tests are helpful because they can provide information about areas of restriction throughout the entire length of the nerve and not in just a few common compression sites.

However, it is important to note that all of the procedures that are used to identify nerve entrapment in the upper extremity have some limitations in accuracy. Any specific assessment procedure has a certain degree of reliability and accuracy; this is true for nerve evaluations as well. Some tests are more accurate than others; this is why relying on special tests alone in evaluation is not effective.

Special orthopedic tests, such as the Phalen’s test for carpal tunnel syndrome are helpful, but only focus on specific locations of entrapment, such as the carpal tunnel. As mentioned earlier, nerves can be irritated from compression or bind in many locations along the entire length of nerve. So, any procedure that can help locate areas of neural dysfunction are helpful.

Research shows that clinicians can improve assessment accuracy with a comprehensive clinical evaluation that includes a detailed history and a series of physical examination methods. Because no single test alone has proven to be highly accurate for recognizing median nerve pathology, combining evaluation procedures produces the most accurate clinical picture of the client’s condition.

There are four common ULNTs: the first two test the median nerve, the radial is tested by the third, and the fourth tests the ulnar. The numbering and naming of these tests is not always consistent, but most commonly they are referred to as ULNT 1-4. To avoid confusion in treatment notes, identify the ULNT used by the nerve being stressed during the test. For example, treatment notes might state, “ULNT #1 with median nerve emphasis.” This article focuses on ULNT #1 for the median nerve because median nerve disorders are the most common in the upper extremity.

Here are some general guidelines for how to perform a ULNT (regardless of which one). The practitioner performs a series of movements that gradually increase tension on the nerve. Symptoms, if present, will usually increase as movements are added. Movements are performed in the order listed with each test. However, it may also be helpful to alter the order in some cases to get more information about the location of decreased neural mobility. For example, if most symptoms are aggravated with the distal upper extremity movements, there is a greater chance that the primary problem(s) are in the distal upper extremity. It may then be informative to perform the distal upper extremity movements first to see if symptoms are reproduced.

During testing, ask the client about changes in symptoms after each movement. Once the client experiences symptoms, it is not necessary to complete the remainder of the movements, especially if the symptoms are strong. The tests can be performed actively or passively, but are usually performed passively so that muscular involvement is minimized.

Carpal tunnel compression is the most common upper extremity nerve compression disorder, but there are at least five other locations along the length of the median nerve where it can be compressed or irritated (Image 1). These locations include the narrow space between the two heads of the pronator teres muscle, the nerve’s passage under the bicipital aponeurosis, and the thoracic outlet region. 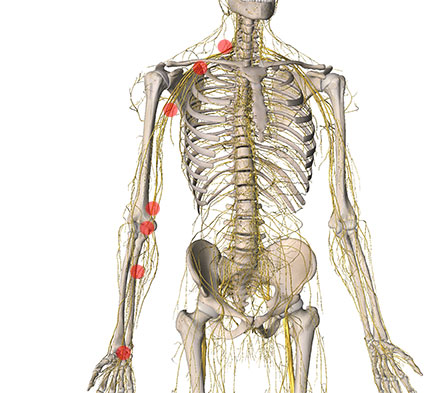 In the starting position for ULNT #1 the median nerve is in a slackened position. Successive movements continually add more stretch to the median nerve until the ending position is reached, which is the position that most stretches the nerve. Check in with the client each time a new movement/position is added, and if the client’s symptoms are reproduced it isn’t necessary to continue through all of the movements because it is counterproductive to produce further nerve irritation.

Have your client lie in a supine position. Stand facing the client’s head on the testing side. The client’s elbow is flexed to 900 at the beginning of the test. Image 2 shows the starting position of the shoulder in ULNT #1. Image 3 shows the ending position. 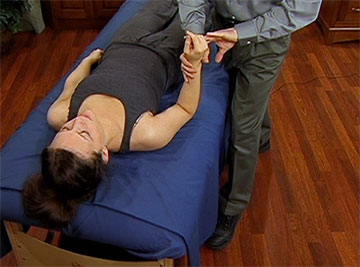 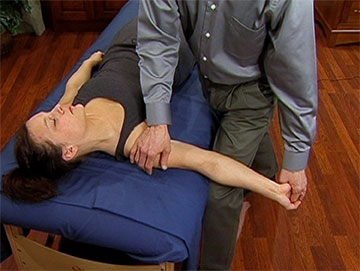 Image 3: Ending Position
This test is contraindicated if shoulder instability is present (previous dislocations or subluxations) because the final test position puts the shoulder in its most vulnerable positions of abduction and external rotation. A video clip of the ULNT can be viewed here: (http://bit.ly/1s4NTnh)

Since this test was first described, there have been a few variations and improvements to increase its accuracy. Almost anyone is likely to have some neurological symptoms by the time they get to the fully stretched position in this test. This result has led to a higher degree of false positive results for the test. In one study, the authors suggested a specific range-of-motion cut-off point in order to decrease the number of false positive results.5 However, despite this proposed range of motion cut-off or limitation, this concept has not proven to greatly increase the accuracy of the median nerve ULNT.4 Keep in mind that some symptoms may arise with anyone at the very end of the test, so it is clinically important to note when symptoms arise prior to the ending position.

The UNLT is valuable on its own, but once you understand the basic principles of the test, it can also be applied in other situations. For example, some of the upper extremity maneuvers that further tension the median nerve could be combined with the wrist flexion position used in the Phalen’s test, the most common procedure used to evaluate carpal tunnel syndrome. Combining some of the upper extremity neural tension maneuvers with the Phalen’s test makes the Phalen’s test even more sensitive, and therefore more accurate, at picking up potential nerve compression problems (Image 4).6

The Role in Treatment

While the ULNTs are used extensively for evaluation, they are also valuable in treatment. For example, they may be used in cases where neural tension develops because fibrous tissue may be binding or restricting the nerve and preventing it from gliding freely. The positions used for the ULNTs are used to enhance mobility of upper extremity nerves through techniques called nerve mobilization, nerve gliding, or sometimes nerve flossing. In future installments of this column we’ll explore neural mobilization techniques and how ULNT positions can be a part of a comprehensive treatment approach.

Modern pain science is helping us understand that the nervous system plays an exceptionally important role in pain complaints. Learning more about biomechanics and physiology of the nervous system is an essential skill that will enhance your treatment effectiveness and help you bring relief to clients who may not have found successful treatment strategies through other approaches.