Painful tendon disorders are highly prevalent today and are most often associated with chronic overuse. Numerous other factors can also lead to these conditions. In this installment we’ll take a look at crucial elements of tendon structure, function, and common causes of tendon pain so we can best help our clients.

Tendons are composed of dense fibrous connective tissue primarily oriented in parallel strands that are composed of collagen and elastin. Collagen mainly gives the tendon its strength and resilience, and elastin provides the tissue with slight pliability. It’s more important for the tendon to be strong and resilient than for it to be pliable. Consequently, there is a higher concentration of collagen than elastin within tendon tissue.

The primary function of tendon tissue is to transmit the muscle’s contractile force to the bone. Some tendons carry a much higher tensile load than others. For example, the proximal tendon attachment of the latissimus dorsi is across the wide expanse of the lumbodorsal fascia (Image 1). That means the pulling power of the muscle spreads across all of those fibers that eventually blend in with the lumbodorsal fascia. The design of this tendon results in less load on each strand. 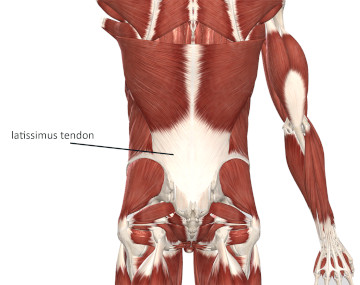 The Achilles tendon structure has a very different story. The tendon itself is a round and pencil-like tendon attaching to the calcaneus. The gastrocnemius and soleus muscles transmit their powerful contraction force through the Achilles tendon. However, the individual tendon fibers must handle greater tensile loads in this case as the force is transmitted through a smaller diameter tendon. Constant high force loads are one reason why chronic overuse pain conditions of the Achilles tendon are so common.

There are three primary tendon disorders caused by chronic overuse, but the distinction between them can sometimes get a little murky. Clinicians often use the term tendinopathy when referring to these disorders. Tendinopathy simply means pathology of the tendon. Let’s take a look at the three types of tendon disorders.

Tendinosis: In the mid-to-late 1980s several research studies were published indicating that many chronic overuse tendon pathologies did not appear to involve inflammatory cells. Their research showed that chronic overuse tendon disorders were likely caused by degeneration of the collagen matrix within the tendon and not from tendon fiber tearing with an inflammatory reaction. As a result of the studies, the term tendinosis (-osis meaning pathology) became more widely used. More recent research has suggested that there still may be some inflammatory activity, especially in the very early stages of a tendon disorder, so the concept of non-inflammatory overuse tendon pathologies is still somewhat debatable. 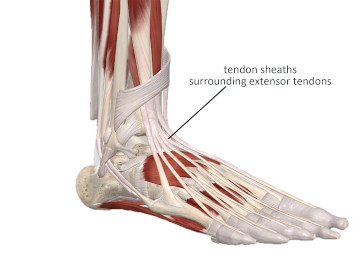 There are a number of potential causes of chronic overuse tendon pathology. The most common is repetitive loading. Certain tendons are far more susceptible to repetitive loading injury than others. Repetitive loading usually refers to repeated pulling on the tendon from recurring muscular contractions. However, recent studies have suggested that chronic compressive loads on tendons may be a primary factor for tendon pathologies as well.1 Due to their anatomical arrangement, certain tendons may be susceptible to compressive forces as the tendon bends around a bony prominence. When its associated muscle contracts, the tendon is pulled tighter against the bone causing increased compressive load on the tendon.

It is relatively easy to understand why specific mechanical forces on the tendon can lead to overuse disorders. However, other factors also appear with some frequency in people with various tendinopathies. It’s not clear why, but obesity, alcoholism, systemic disorders, and various genetic factors also appear with regular frequency in people suffering from tendinopathy.2

Certain medications are also known to cause tendon disorders. For many years it was standard practice to prescribe corticosteroids for chronic overuse tendon problems because they were perceived to be an inflammatory problem. Corticosteroids are very effective at managing inflammatory disorders. However, extensive research around corticosteroids has shown that they have long-term detrimental effects on collagen regeneration, so while they are very effective at pain reduction, they may be harmful in the long term for healing of the damaged tendon tissue.

Another important group of medications that are known to cause tendon problems are the family of antibiotics called fluoroquinolones. The use of these antibiotics is an essential factor to pick up in the client history even though it may seem unrelated. Fluoroquinolones inhibit fibroblast metabolism that is necessary for tendon regeneration.3 Clients may often be taking this group of antibiotics for conditions such as respiratory infections, and then develop some chronic overuse tendon pathology without knowing the correlation between the two.

The degree of pain felt in tendon disorders is not always consistent with the degree of damage or dysfunction in the tendon tissue. That can make identifying tendon disorders at different stages more challenging. However, there are several consistent patterns during assessment with most overuse tendon pathologies. The chart below helps you recognize how various forces on the tendon are evaluated during simple range of motion evaluations.

Active Shortening: Tendons don’t actually shorten, so the term ‘actively shortening’ refers to the associated muscle. There is a load on the tendons during active movement, so when a tendon pathology is severe enough, this action usually produces pain. However, for some overuse tendon disorders the amount of load in an active range of motion evaluation may not be enough to cause pain because the tensile load is not significant enough.

Active Lengthening: Just with active shortening, ‘active lengthening’ refers to actions of the muscle (in this case, eccentric contractions). There is a tensile load on the tendon during active lengthening, and this load increases near the very end range of movement as the connective tissue elements in a muscle are also pulled. Therefore, tendon pathology pain is usually greater near the end range of elongation.

Passive Shortening: Passively shortening a muscle removes the load on the tendon. Therefore, pain from tendon disorders decreases with passive shortening. This principle is vital to consider because recognizing what should NOT hurt can help establish a pattern that points to a particular tissue involved.

Manual Resistance: One of the most effective methods of identifying tendon disorders is with manual resistance. During resisted muscle actions there is a more significant load on the tendon than during other range-of-motion evaluations. This assessment method is especially helpful for evaluating tendons like those of the upper extremity, which are not weight-bearing.

The pain felt from tendon disorders in these various evaluation procedures is usually felt in the tendon itself. Therefore, palpation is also important in evaluating these disorders. Palpating the tendon at the same time as the range-of-motion procedures can increase the load on the tendon and make each testing procedure more sensitive.

Remember, the pain level felt in the tendon may not directly correlate with the amount of tissue damage or tendon dysfunction. Sometimes tendon damage can be quite advanced before it becomes symptomatic. On the other hand, we also know that even minor, early-stage tendon disorders can be quite painful.

Massage is a common treatment strategy for overuse tendon disorders, with the most common likely being deep transverse friction (DTF) (Image 3). For years it was taught that the primary physiological effect of DTF was that it helped to align scar tissue after tendon fiber tearing. When research indicated that tendon fiber tearing was not a likely cause for most chronic overuse tendon disorders, that called into question how DTF works. 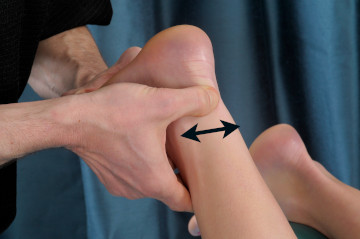 DTF applied to the tendon still appears an effective treatment for tendon disorders, however, especially when combined with other strategies that focus on the entire muscle-tendon unit. So why does it work? One theory that has some initial research support is that the specific pressure and movement applied during DTF stimulates fibroblast activity that encourages collagen repair in the damaged tendon. More research is needed to verify this idea, but it seems to be plausible.

Massage techniques that focus on the entire muscle-tendon unit are also effective at pain management with tendon disorders. Massage helps manage pain through a process called descending modulation, in which a particular stimulus (the therapeutic touch of massage) helps to turn down the volume on sensory information that heightens the pain response. It is the exact mechanism behind soothing a sore arm or leg by gently rubbing them.

Massage techniques that stimulate the sensory and proprioceptive activity of the involved muscles may be quite effective in initiating this process. For example, active engagement techniques that use active muscle contraction along with a specific massage technique are beneficial for encouraging the descending modulation response (Image 4.)

Another factor that has shown significant benefit in tendinopathy treatment is progressive loading of the tendon. Eccentric exercise appears to be the most effective means of increasing load on the tendon for these rehabilitation strategies. Eccentric loading on the tendon seems to have both neurological and mechanical responses in the tendon that help encourage a more rapid return to function. Many of the active engagement techniques mentioned above use eccentric actions on the tendon while massage is applied. That may be one of the main reasons why they appear so effective.

Chronic overuse tendon disorders are one of the most common soft-tissue problems you are likely to see in your practice. Isolating the problem and distinguishing tendon pathology from other soft tissue causes will help you construct the most appropriate treatment strategy. In addition to the soft tissue work we employ we are also educators with our clients. They will spend the majority of their lives outside our treatment room and we should help them understand things they should avoid and things they can do to enhance the treatment plan.

To paraphrase Canadian physiotherapist, Greg Lehman, our primary goal in any treatment strategy for these problems should be first to ‘calm things down, and then to eventually build them back up’. The fundamental approach to effectiveness is recognizing where that Goldilocks zone is of calming things down and building them back up. If you don’t decrease irritability in the tissues enough, or you try to strengthen them too fast, you are likely to perpetuate the problem. If you spend too much time trying to decrease irritability and never focus on strengthening and treating the tendon, you may delay appropriate healing. Like so many things in our field, finding the ideal balance is the trick!

View all posts by Whitney Lowe →
The Future of the Profession (with Sandy Fritz)
The Continuing Education Conundrum – More Carrots, or More Sticks?