As the population of the country ages, massage practitioners should be aware of various diseases and conditions that are increasingly common in an older age group. One such condition is a connective tissue disorder that affects the palmar fascia of the hand, called Dupuytren’s contracture.

The primary structure affected in Dupuytren’s contracture is the palmar fascia (Figure 1). The fibers of the palmar fascia are arranged in different directions. However, it appears that the longitudinally-oriented fibers (ones parallel with the long tendons in the hand) are the ones most affected in this condition. 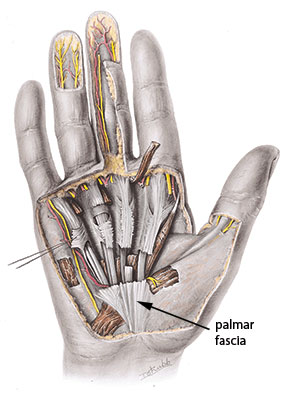 The palmar fascia is strongly tethered to the skin and underlying bone, unlike most of the sub-cutaneous fascia in other regions of the body. This tethering is to increase the strength of the fascia against tensile stresses between the skin, fascia, and bones that would have a tendency to pull the fascia free from its attachments. The skin and fascia of the hand are susceptible to this kind of problem because stresses occur on the soft tissues of the palm when grasping objects with strong force. These forces are significantly higher in the palm than in other areas of the body.

Dupuytren’s contracture begins with a fibrous shortening of the longitudinal palmar fascia fibers. The pathological process that starts the contracture is still unclear. However, it appears to begin with a proliferation of fibroblasts, producing new collagen that forms into nodules and fibrous restrictions.

There are different types of collagen in the body. Type 1 collagen is most prevalent in tendons, ligaments, and superficial fascia. Type 3 collagen is present in high concentrations in scar tissue. The fibrous nodules and collagen binding that occurs in Dupuytren’s contracture is predominantly Type 3 collagen, which may be one of the reasons it is so difficult to stretch and elongate. As the collagen binding progresses, the fascia will further contract and draw the digits of the hand into a fixed flexion deformity (Figure 2). The metacarpophalangeal (MCP) and proximal interphalangeal (PIP) joints of the 4th and 5th digits are the ones most commonly affected. 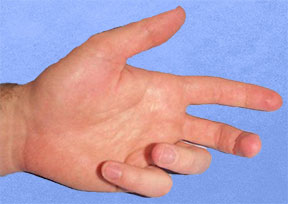 There appears to be a strong genetic predisposition to development of Dupuytren’s contracture. It is most common in people who are of northern European descent.1,2 While the condition does not appear directly related to traumatic incidents in the hand or forearm, there is some indication that some inciting disease or event may encourage development of the condition.

There are several other common factors in the symptom picture of people with Dupuytren’s. It is far more common in men than in women and appears with greatest frequency for people in their 40s or 50s. The incidence of this pathology increases with smoking, alcoholism, diabetes, epilepsy or other convulsive disorders.

Information in the client history helps identify any of the risk factors mentioned above. If the condition is in the early stages, there may be some fibrous nodules that are palpable in the palm region, especially over the 4th and 5th digits. In many cases the skin will pucker a bit in the region over the fibrous nodules. The surface of the palm is also likely to be tender to palpation.

If the condition is in an early stage, there will probably be some limitation to active as well as passive extension in the digits; the full flexion deformity, however, will not be evident. In later stages, the flexion deformity will be much more pronounced and the hand will appear more like the image in Figure 2.

Some pathologies in the hand may have similar symptoms. Trigger finger (stenosing tenosynovitis) may have movement restrictions and pain patterns similar to those in Dupuytren’s contracture. However, with trigger finger you can usually force the digit into full extension, even if the action is a bit painful and the palmar nodules are usually not present.

In the early stages, massage and other forms of soft-tissue manipulation are far more likely to be helpful than in later and more advanced stages. The greatest benefits are likely to result from techniques such as deep longitudinal stripping, myofascial approaches, and vigorous regular stretching.

It is very helpful to teach the client an aggressive plan of self-stretching so the tissues can have the greatest opportunity to reduce the fibrous binding. Stretching the fingers and wrist in hyperextension is the motion to emphasize most.

Myofascial trigger points in the palmaris longus or other forearm muscles may contribute to either pain or movement restrictions that may exacerbate the fibrous restriction process.3 Therefore, when treating this problem, address the forearm muscles and any other soft tissues of the upper extremity that might also be contributing to further tension in the palmar fascia.

Other conservative treatment approaches may be used in physical or occupational therapy to address this condition. If these conservative approaches are not beneficial, surgery may be performed to reduce the restrictions of the fascia and restore proper range of motion in the hand.

Surgical treatment will most often include procedures such as a fasciotomy, involving a longitudinal incision following the course of the hand and finger tendons in order to free up any restriction between the fascia and its adjacent tissues. In other cases, a fasciectomy may be performed. This is a procedure in which a portion of the palmar fascia may be resected or removed in order to enhance mobility. This mobility can be further enhanced by a surgical incision called a Z-plasty.

In this procedure the incision looks like a zig-zag (Figure 3). Due to the disruptive nature of this procedure, there can be a long period of post-surgical healing. However, mobility is restored for most people who have this surgical procedure performed. 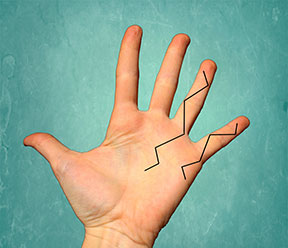 There may be some alternatives to the surgical procedure in advanced cases of contracture. Initial trials indicate that injection of collagenase (an enzyme that can encourage the breakdown of collagen) is helpful in reducing the fibrosity of Dupuytren’s. However, further clinical trials are necessary to validate this theory.4

If addressed early in the development phase, massage may be helpful in addressing this complaint and may prevent it from becoming a more serious problem. If the condition has progressed further and surgery has become necessary, massage can still be valuable in the post-surgical phase. For example, the Z-plasty procedure runs the risk of scar tissue developing after the surgery. When sufficient time has passed, soft-tissue mobilization can be helpful to encourage free movement between the skin and adjacent fascia.