By Whitney Lowe on April 1, 2015 in Clinical & Orthopedic Massage

Have you ever heard the term, Trigger Finger, and wondered what is really occurring? The condition gets its name for the locking and snapping motion of the finger that is caused by finger tendons binding against an adjacent retinaculum. Tendons in the hand and fingers must bend around sharp angles in the numerous joints they cross. Sometimes tendons become thickened and their ability to easily glide past other structures is limited.

The tendons of the finger flexors are surrounded by synovial sheaths to enhance mechanical function and reduce excess wear. Each tendon also passes underneath several retinacula located around the finger and hand joints (Figure 1). Fibrous nodules or tendon thickening can sometimes develop right where the tendon passes under the retinaculum, making it difficult for smooth movement of the tendon. Trigger finger occurs when a fibrous nodule or thickening develops on the surface of the tendon and causes it to get caught on the edge of the retinaculum during movement. 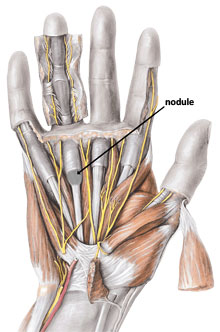 Trigger finger is sometimes called stenosing tenosynovitis, although the term is being abandoned because there is rarely inflammation or other characteristics of true tenosynovitis in the affected tissues. It is not clear what causes the tendon thickening of trigger finger; it is sometimes attributed to systemic diseases such as diabetes, hypothyroidism, gout, or rheumatoid arthritis.In many cases, there is no systemic pathology and it is unclear why the condition developed. The condition affects women more often than men and mainly affects those 45–60 years-old. There does not appear to be an association with repetitive activity or overuse.

The nodule on the affected tendon may be visible, especially during flexion or extension of the finger. In some cases, movement into extension is so impaired that the finger is held in flexion, causing a flexion deformity. Visible indicators of systemic conditions, such as rheumatoid arthritis, which affect the joints are cause for concern and a correlation exists between trigger finger and these disorders.

The tendinous nodule is often palpable in the region where it is getting stuck. One question often asked is whether or not massage can do anything to reduce this fibrous nodule and reduce the trigger finger symptoms. There currently aren’t any research papers that have investigated the use of massage in treating this condition, but I’ve seen situations where it did help and those where it didn’t. As long as massage is performed within the client’s pain tolerance there doesn’t seem to be any detrimental effects of massage treatment, so it could certainly be tried. Most likely improved success would come when other strategies such as diet, stress reduction or metabolic balance are also employed.

What is Haglund’s Syndrome?
Working the patellar retinaculum