A recent interesting case reveals how lateral hip and thigh pain can easily be misinterpreted and ascribed to other causes. A client, who I will call Steve, was experiencing lateral hip pain around the greater trochanter of the femur. Some of the pain was extending into the lateral thigh region as a deep aching pain sensation.

One practitioner thought that Steve had trigger points in his gluteus minimus muscle and another thought he had a joint capsule problem. Treating the trigger points via direct pressure on the tissues gave some brief intermittent relief, but ultimately was unsuccessful in resolving the issue. In this instance an alternative explanation seemed necessary for Steve’s symptoms.

A frequently overlooked cause of lateral hip and lateral thigh pain is entrapment of the lateral femoral cutaneous nerve (LFCN). This condition also goes by the name of meralgia paresthetica. The LFCN supplies sensation to the skin on the lateral thigh and hip region.

The nerve originates from the L2 and L3 lumbar nerve roots and then courses around the inner aspect of the iliac crest. It then descends beneath the inguinal ligament. It takes a very sharp bend just as it passes the inguinal ligament, which is one of the locations where it is frequently entrapped (Figure 1).1 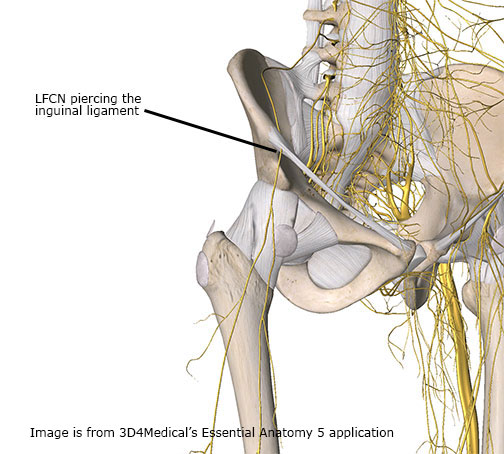 There are a few different anatomical variations in the pathway of the LFCN. In some cases the nerve may pierce through the inguinal ligament or the sartorius muscle as it is leaving the pelvis and entering the anterior/lateral thigh region.2 It is common for nerve compression to occur in this region from clothing such as tight jeans, especially if the individual is sitting for long periods. Nerve compression can also occur from girdles, belts, military armor, seatbelts, or in diabetic or obese people.

LFCN is often mistaken for other conditions such as lumbar nerve root pathology, trochanteric bursitis, hip joint pain, joint capsule problems, abductor muscle pain, myofascial trigger points, or iliotibial band pain. It is common for manual therapy practitioners to engage direct treatment of these tissues in an effort to address the pain problem. However, in many cases this treatment approach might cause further aggravation of the problem if they do not recognize that the disorder is coming from nerve compression. Manual compression of nerves from soft-tissue work can further aggravate the condition.

The LFCN is a very small nerve and often the region of compression is simply a small area where the nerve perforates through another tissue, where it becomes constricted. One of the more effective ways to address this type of disorder is simply applying traction to the skin and pulling the skin over the upper anterior thigh in an inferior direction (Figure 2). This treatment actually helps to mobilize the nerve tissue and decrease the degree of binding between the nerve and adjacent tissues that it is interfacing with. 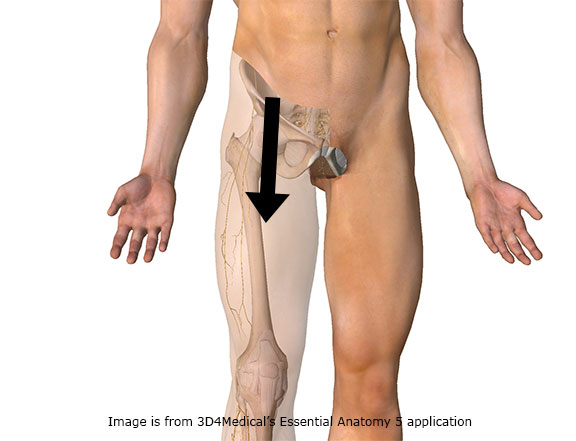 If you look at many of the current fitness magazines or advertisements that appear throughout social media, you will see frequent references to soft-tissue manipulation methods such as foam rollers, massage tools, or all kinds of other treatment methods to address pain throughout the iliotibial band and lateral thigh. It is possible that LFCN entrapment is at the root of the problem and continuing to press on the structures further with foam rolling or deep manual therapy, may only serve to prolong the condition and exacerbate the problem. Yet the solution may be as simple as pulling the skin on a frequent basis to give appropriate mechanical relief to this nerve, which would then decrease irritation and eliminate the pain complaint.