In this study the researchers were attempting to determine if forward head posture, frequently associated with long periods of computer use, is directly correlated with an increase in myofascial pain syndrome. To make this determination, they took a cervical x-ray image of 80 participants (40 men and 48 women). They took precise measurements of anatomical landmarks to determine if there was a significant skeletal forward head posture. 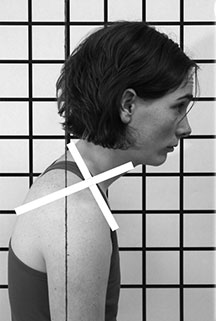 The physician performing the investigation examined the scalene muscles, cervical paraspinals, upper trapezius, levator scapula, infraspinatus, supraspinatus, rhomboids, teres minor, deltoid, and SCM muscles. The most common location for trigger points was the upper trapezius and the second most common location was the cervical paraspinal muscles.

The researchers suggested that one possible explanation for their findings is that cervical facet joints may be the cause of forward head posture pain instead of the soft tissues. While this seems feasible based on skeletal mechanics (there is increased facet joint compression with forward head posture), the idea that facet joint compression is the cause of soft-tissue pain in the cervical region has serious limitations.

There were notable limitations in the accuracy of this study. As mentioned earlier, it does not specify if the individual who was tasked with identifying myofascial trigger points through palpation was adequately trained to do so. Another potential flaw in the methodology of the study is using a static x-ray to determine forward head posture. Static forward head posture is different from that which might occur from prolonged postural stress. Individuals may not appear to have a forward head posture in a static x-ray where they are told to sit upright in a chair for the x-ray machine. Put that same person in front of their computer terminal for three hours, and the posture is likely to change. It would be more accurate to take the x-ray at the individual’s workstation to make sure it matches what occurs on a regular daily basis.

Another important factor with examining forward head posture this way is that chronic myofascial pain results from prolonged load on the myofascial tissues. An x-ray machine is not capable of measuring prolonged load on the myofascial tissues. Consequently an individual could put their head in a forward position for long periods and have significant myofascial pain but not have a skeletal adaptation to that posture that shows up when they sit upright in a chair for the x-ray machine.

While the goal of the study was good – people are spending increasing numbers of in front of devices – it failed due to methodology and conclusions. This study is an excellent example of how a good study on musculoskeletal issues can go bad without the involvement of those specifically trained in soft-tissue related skills, like palpation. Additionally, just because a study is published in a reputable journal, there can still be serious methodological flaws and one is warranted to be very careful about any conclusions that are drawn from a flawed study design like this one.