By Whitney Lowe on February 12, 2020 in Assessment

A video of this piece can also be viewed on YouTube at: https://www.youtube.com/watch?v=MmwEfFXxS0k

There was a post on a Facebook group earlier this week from an individual that was looking for some suggestions for how to elongate the inguinal ligament for a client that had hip pain. So there’s a couple of things that we want to look at when we consider trying to do something like this. The first is really thinking about what is the nature of the tissues that we’re attempting to treat and what are we trying to do with them? So when you think about the ligaments of the body, they’re mainly designed to maintain stability in the body, so they don’t have contractile capabilities to shorten or elongate. Because if they did, they wouldn’t be able to maintain that degree of stability. So the idea that we want to try to elongate a ligament is really somewhat physiologically inaccurate because they just don’t elongate like that. They’re really designed to maintain stability.

Now, what might be causing that pain sensation for that particular client? That’s still something that we’d want to uncover. And I want to call your attention to a number of other possibilities. There’s quite a number of tissues in the anterior hip region, but several possibilities that frequently get ignored for anterior hip pain related to various nerve compression conditions in that region. So again, as we look at what the different tissues that are in the area, think about all the different possibilities of what might be in that region and what can we actually affect with manual therapy in various different ways. So let’s take a look at what some of those other nerve structures are in that area that might be contributing to this problem and see what we could do about helping to reduce the pain sensations for that individual with the anterior hip pain.

Okay. So let’s take a look at the anterior hip region where we were exploring the possibilities of pain that might be occurring in this region. If we zoom in a little bit closer here for just a moment, here is that inguinal ligament (Figure 1) that we were referring to earlier where the practitioner had suspected that the client was having problems with that and was thinking about this might be something to try to relax or elongate. 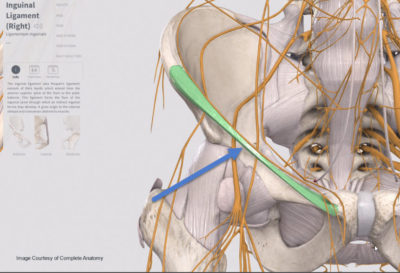 But again, this ligament doesn’t really elongate, so there’s not going to be a real effective method of trying to encourage any greater elasticity in that particular tissue. However, if we look adjacent to this inguinal ligament, there’s quite a number of nerves around here that may be also responsible for what’s causing that pain. So let’s start over here to the far side and take a look at some of these things that may be playing a part in that.

The first one here is the lateral femoral cutaneous nerve, so that one’s very close to the upper edge of that inguinal ligament there. And this nerve is responsible for sensory distribution down the outside lateral edge of the leg and it is often mistaken for iliotibial band pain, but it could get compressed underneath the inguinal ligament around the interior hip region and cause pain there. 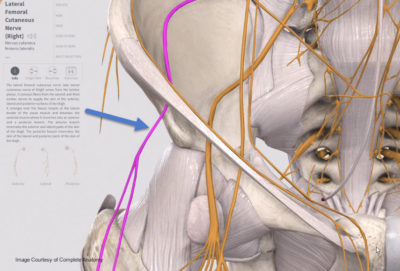 Now, the next one we’ll take a look at here is the femoral nerve and it can also get trapped underneath the inguinal ligament and cause anterior hip pain as well as pain down the anterior thigh. This is a pretty big nerve and there’s a lot of potential for that to get entrapped. 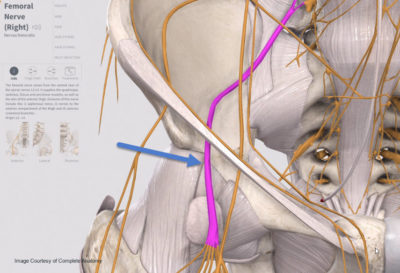 Another one in this region that can get compressed is the ilioinguinal nerve. You can see it also coming down to the groin region and across the anterior hip, but that is possibly one that might be getting entrapped or compressed against the inguinal ligament itself and potentially causing some pain problems in there. 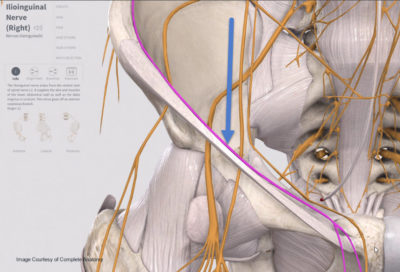 Another one we’d want to look at for possibilities here is the genitofemoral nerve. Again, this one is coming around and giving some sensory innervation to the anterior thigh region and the inner thigh area. This nerve is susceptible to compression underneath the inguinal ligament. These nerves are susceptible depending on also the types of clothing an individual is wearing or various other factors that might be compressing it with repetitive motions that they’re doing in the hip region. 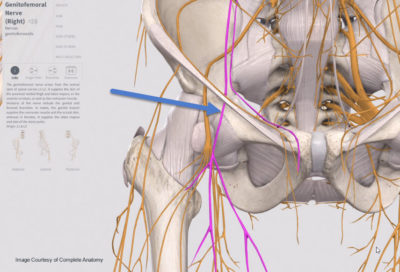 So these are all potential causes of anterior hip pain. And now, of course, there are other things like the iliopectineal bursa, that could be a cause of that pain. So maybe perhaps that bursa is getting compressed or irritated to some degree, as could be the joint capsule that’s just underneath that bursa, that’s a richly innervated tissue. So the point here is we always want to think about a number of other tissues that might potentially be involved and then look for strategies that are going to be most effective to address those.

So our key takeaway here, again, is two things. First of all, really consider what are the physiological characteristics of the different tissues that we’re trying to address or treat. And again, what are the sort of strategies that we can use to affect change in those particular tissues. And of course, consider other tissues in that region or other possible causes of pain that might not necessarily be even tissue-based, maybe a systemic disorder or central nervous system pain sensation. Identifying the most likely cause helps us construct the best treatment strategies to get the best results for our clients.

Lesson Plans 06: Five Simple Things to Enhance Your Visual Aids
Is It Safe to Work on Someone With a Herniated Disc?