Back pain is one of the most pervasive causes of disability and a frequent reason for people to visit massage therapists. Many causes of back pain have no specifically identified tissue pathology and therefore get labeled “non-specific” low back pain. However, sometimes there is a primary tissue dysfunction present that just doesn’t get evaluated properly. The back mouse is a good example

Back mice are freely moveable fibro-fatty nodules that occur most commonly in the sacroiliac region near the superior portion of the iliac crest. They are often palpated as rubbery nodules just under the skin. They may also be called an episacroiliac lipoma.

The reasons they gather in this area are not fully clear. Cadaver investigations have shown that they occur in areas where fatty tissue herniates or perforates through overlying fascial layers, so it could have something to do with the multiple fascial layers in this region.

A recent paper described a case study of a 47 year-old woman that presented with bilateral low back pain that did not appear to be caused by any other major tissue dysfunction in the back.1 In addition to low back pain she had intermittent numbness and cramping in the posterior thigh region.

A detailed physical exam was performed that showed no other serious neurological deficit and no indication of nerve root pathology or spinal structure involvement. There were clearly palpable soft-tissue nodules in the sacroiliac region and when pressed they reproduced the primary pain she had been experiencing. She was eventually treated with corticosteroid and anesthetc injection of the nodules. This treatment was successful in relieving the pain from the nodules.

Back mice are a common finding for massage therapists. Physiologically they are described as a fatty herniation through fascial layers. In this reported case study they were treated with corticosteroid and anesthetic injection. There does not appear to be any clear physiological change produced to the fatty nodules from the injections. Instead the treatment focused on removing the pain sensations and the patient reported a full resolution of symptoms.

The fact that symptoms were relieved with a pain relief approach without doing anything physiological to the nodules themselves indicates that the back mice pain may be primarily neurological in nature. Perhaps the nodule is causing pressure on the cluneal nerves (Figure 1) or other local cutaneous nerve tissue? 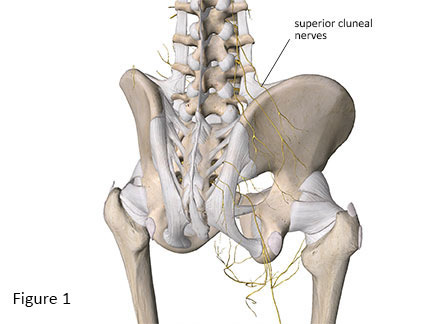 Massage therapists have highly developed palpation skills because we spend so much time directly palpating the soft tissues. It is common to find these fibro-fatty nodules in clients and many times these same clients may report back pain. Next time you find them try palpating them to see if it causes an increase in the specific reported back pain. If it does, they may be at least partially responsible for the pain.

A great question that comes up now is what role massage could play in reducing discomfort from back mice. It’s not likely that deep pressure on these nodules would be beneficial. However, if the nodules are irritating superficial nerve structures like the cluneal nerves, light work in this area that helps mobilize the superficial fascial tissues and reduce neural irritation could certainly be beneficial.

Next time you have a client with back, posterior pelvis, or posterior thigh pain and they also have these episacral lipomas, consider these “back mice” as a possible cause. Now, if only we can build a better mouse trap…