Soft-tissue foot pain is widespread, especially in active populations. Problems such as plantar fasciitis, Achilles tendinitis, or tarsal tunnel syndrome are commonly reported causes of chronic pain and disability. However, another muscle in the foot should be considered when investigating medial ankle or plantar surface foot pain. Disorders of the flexor hallucis longus (FHL) are routinely overlooked and may frequently be misdiagnosed as some of these other foot problems mentioned above.1

The proximal attachment of the FHL is on the distal 2/3 of the posterior fibula and the interosseous membrane. It is one of three muscles in the deep posterior compartment of the leg, and shares that compartment with the tibialis posterior and flexor digitorum longus (FDL). These muscles course together through the tarsal tunnel on the medial side of the ankle (Figure 1). The FHL’s distal attachment is on the plantar surface of the hallux (great toe). 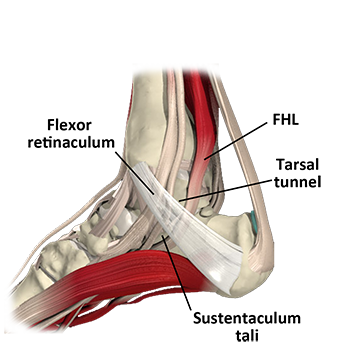 Along its path the tendon must curve around the sustentaculum tali, a prominent bony landmark on the medial side of the foot (Figure 1). One common cause of FHL dysfunction is friction and irritation of the tendon at this site. The FHL tendon also passes between two sesamoid bones at the metatarso-phalangeal joint where the first metatarsal meets the hallux. Irritation of the tendon or its synovial sheath can also occur at this region.

The FHL muscle is difficult to palpate along most of its length because it is so deep in the posterior compartment. It is easier to palpate around the medial malleolus near the tarsal tunnel. It is the most posterior of the three tendons that curve around the medial malleolus. When palpating in an anterior direction from the Achilles tendon on the medial side of the heel it is the first tendon encountered (Figure 1). The tendon also becomes more prominent to palpation during resisted toe flexion.

In most cases of FHL dysfunction normal anatomical structures are the root of the problem. However, anatomical anomalies can account for the same symptoms as well. These anomalies may not be identifiable without more detailed investigation such as MRI. For example, one author reported a case where there were persistent symptoms of FHL dysfunction that did not respond to conservative treatment. Upon surgical investigation the patient was found to have an accessory FHL muscle that could account for the larger muscle mass and symptoms of irritation resulting from activity.1 This anomaly may not be as rare as it seems because it has appeared in other references as well.2,3

The most common problems with the FHL are tenosynovitis, muscle strains, and tendinosis. These conditions often occur together due to constant friction or irritation of the muscle. As a result, the collection of these conditions is sometimes called flexor hallucis syndrome.

Stenosing tenosynovitis of the FHL is reported most commonly in ballet dancers, but also occasionally in runners. High levels of tensile stress are placed on the FHL when the dancer goes into the en pointe position (Figure 2). In this position there is a forceful plantar flexion as the entire weight of the body is being borne on the tips of the toes. The toes are held in flexion and the foot is in extreme plantar flexion. The strong tensile load on the FHL tendon may irritate the tendon as it is pressed against the sustentaculum tali.

A condition called hallux saltans may also develop as part of FHL overuse. Hallux saltans is the development of a nodule along the FHL tendon and/or its sheath. This nodule may produce a sort of popping effect of the hallux during contraction and elongation because the nodule drags across tissues that are adjacent to it. The popping sensation is the same process that occurs with trigger finger in the hand. This popping or triggering is accentuated by friction between the nodule and the flexor retinaculum that lies immediately superficial to the tendon (Figure 1).

Problems may occur with the FHL tendon on the plantar surface of the foot as well. Scar tissue from tendon irritation or plantar fasciitis may cause the tendons of the FHL and flexor digitorum longus (FDL) to adhere to each other (Figure 3). Adhesion between these structures is evident if there is a significant clawing of the other toes when the FHL is activated during attempted flexion of just the great toe. 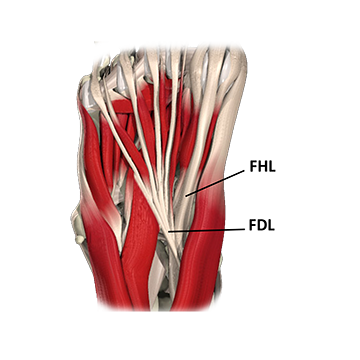 In addition to problems with the tendon and the tendon sheath, the FHL is susceptible to overuse muscle strains near the distal musculotendinous junction. In the FHL the distal musculotendinous junction is located just posterior to the medial malleolus. Strains in this region may be accentuated by friction forces of the muscle and tendon against the posterior aspect of the tarsal bones just before the tendon enters the tarsal tunnel.

Due to its anatomical arrangement the FHL muscle is vulnerable to many of the described overuse conditions. However, FHL dysfunction is not as common as other foot pathologies, so problems in this muscle-tendon unit are often misdiagnosed. All of these described FHL dysfunctions can benefit from soft-tissue treatment so it is valuable for the massage practitioner to have a thorough understanding of this pathology as well as how to evaluate and treat it.

What Massage Technique Should I Use?
Cubital Tunnel Syndrome