The ankle complex provides a firm base of support for holding up and balancing the weight of the body. Yet, it also allows significant mobility. The ankle’s architecture must allow for adaptations in ground surface and propulsion of the lower extremity. It also functions to distribute high force loads. A good understanding of ankle structure and mechanics will help you construct effective treatment strategies for lower extremity problems.

There are two primary joints that make up the ankle complex. The first is the talocrural joint, where the distal tibia and fibula articulate with the talus (Figure 1). The talocrural is considered the “true” ankle joint. It is a synovial hinge joint with a joint capsule and supporting ligaments. The primary actions at this joint are dorsiflexion and plantar flexion. 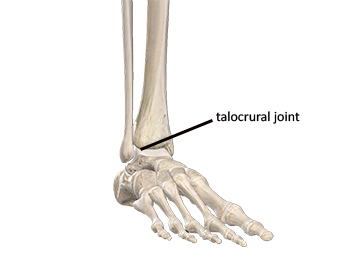 Because the tibia and fibula are tightly bound together at their distal articulation, they form an almost continuous contact surface for the superior portion of the talus. The fibula extends farther distally than the tibia does. This means that the distal portion of the fibula helps prevent excessive foot motion to that side (eversion). This is the primary reason that ankle sprains from excessive eversion are less common than sprains from excessive inversion. 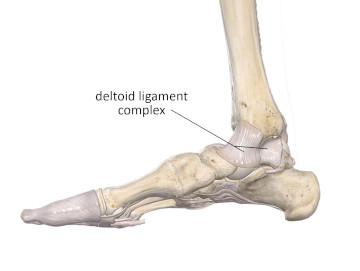 Stability on the lateral side of the ankle is enhanced by three primary ligaments—the anterior talofibular, posterior talofibular, and calcaneofibular. These three ligaments don’t sit as closely together as the ligaments on the medial side (Figure 3). They are also not as strong as the deltoid ligament. The strength deficit of these ligaments is another factor for the greater incidence of lateral ankle sprains. 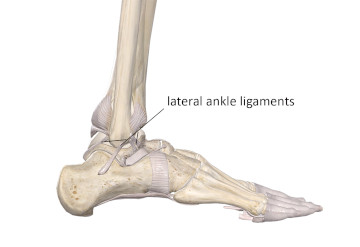 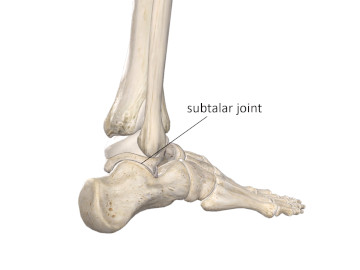 The structure of the talocrural joint imitates a strong architectural structure called a mortise and tenon (not tendon). The mortise, in this case, is a curved concave surface created by the distal portion of the tibia and fibula. The tenon is a projection that fits up into the curved concave surface of the mortise. In the talocrural joint, the tenon is the superior portion of the talus.

In many joints of the body the joint capsule will add significant strength to the joint. However, in the ankle this is not the case. The joint capsule of the talocrural joint is not very strong and therefore most of the stability is created by the lateral and medial ligament structures. For example, the deltoid ligament complex on the medial side of the ankle is very strong for the size of the joint it spans. Forces that would cause a ligament sprain at many other joints will usually not be sufficient to tear the deltoid ligament. In fact, the forces required to tear the deltoid ligament are often so strong that the ligaments will tear away from the bone or tear a chunk of bone with them before actually tearing the ligament fibers. This kind of injury, where the ligament tears away a chunk of bone with it, is called an avulsion fracture.

There is a greater range of motion in inversion than in eversion. This is because the distal portion of the fibula extends farther inferiorly to prevent excessive eversion. This bony arrangement also lends greater stability, and resistance to forces that would sprain the deltoid ligament, therefore further enhancing its strength.

The ankle ligaments provide most of the joint stability, but we should not ignore the stabilizing role of the muscles. We usually think of the muscles as creating movement at the joints, but they also play an important role in aiding stability. For example, since the lateral ankle ligaments are not as strong as those on the medial side of the ankle, they could use some support in maintaining lateral stability. The peroneal muscles provide this additional stability for the subtalar joint. When contracting isometrically or eccentrically they help reduce excessive inversion of the ankle.

The foot and ankle complex is a masterful design of form and function that allows us to walk around on two feet while maintaining balance during many different movements. As a massage practitioner, a greater respect for the complexity of these joint regions will help us better understand the role that the soft tissues play in various pain and injury complaints at the ankle.

View all posts by Whitney Lowe →
Episode 34: Thoracic Outlet Syndrome: What You Didn’t Know
Episode 35: Resources That Inspire Our Learning