By Whitney Lowe on April 23, 2021 in Uncategorized

The sacroiliac joint (SIJ) is a complex anatomical structure. It is the joint where the weight of the upper body, borne by the skeletal elements, is transferred to the lower extremities and eventually to the ground. The joint is held intact by an extensive webbing of anterior and posterior sacroiliac joints to prevent excessive movement (Figure 1). Yet, despite this tight webbing of ligaments, there is a slight amount of movement necessary at the SIJ. Biomechanics are complicated at the SIJ because there are two halves of the pelvis that must work in coordination with each other, but also somewhat independently. If movement is altered significantly at one joint and not the other, there is an imbalance of forces acting on the joint and this is frequently blamed for pain in the sacroiliac region. 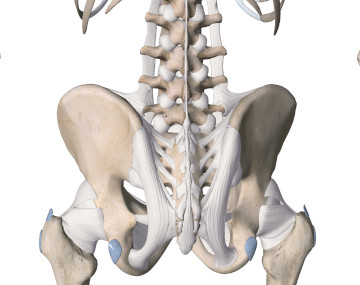 Pathology at the SIJ may be responsible for pain sensations in the back, pelvis, or lower extremity. It is often suggested that SIJ pathology be evaluated when an individual complains of pain in any of these regions, to see if it is playing a role. However, many of the high-tech diagnostic studies like MRI or X-ray may not tell us very much about pathology or dysfunction in mechanics of the SIJ. Therefore the clinical practitioner often must rely chiefly on physical examination procedures to gain information about whether the joint is functioning properly or if certain pain complaints are related to SIJ pathology.

One of the difficulties in evaluating SIJ pathology is that the movements at the joint are not easy to quantify or measure. The amount of movement is quite small and it is not easy to see exactly how the movements are occurring. There have been attempts to use palpation during movement to evaluate proper SIJ function, but it is unclear how accurate these attempts are. Many researchers and clinicians have suggested that improper movement (either excessive or decreased joint motion) is a likely source of pain for individuals with SIJ pain. This would certainly seem to make sense.

There are several procedures that have been used to evaluate SIJ movement and pathology through palpatory examination. These methods focus on finding bony landmarks and following them as an individual does certain movements of the pelvis. One of the more common methods is called the Gillet test or sacral fixation test. In this procedure the client is in a standing position and the practitioner locates the client’s posterior superior iliac spine (PSIS). Once the PSIS has been located the client is instructed to lift one leg and bring it up toward the chest while the practitioner maintains contact with the PSIS. If the PSIS moves only minimally or in a superior direction, the joint is said to be hypomobile or “fixed.” In normal movement the PSIS should move in an inferior direction when the client lifts the knee up toward the chest. It is postulated that the lack of mobility in the SIJ is likely to be a primary cause of the client’s symptoms.

In order to determine if an assessment procedure like this is accurate we must decide if this motion is something that could be perceived by a number of individuals or if it is only likely to be picked up by one specially trained person. The way to judge the effectiveness of a procedure like this is to examine what is called its inter-examiner (or inter-rater) reliability. This reliability factor indicates the likelihood that several different practitioners, who all saw one client with a problem, would be able to come up with similar descriptions of the movement.  For example, if Susan has low back and sacroiliac pain and she has her sacroiliac motion evaluated by Ellen who determines with the Gillet test that there is a fixation on the right side SIJ, what would happen if she also went to Kevin, Mary, and Steve for that same evaluation? Would they all find the same right side fixation when they performed the Gillet test? If it were likely that they would all find the same thing then we would consider the Gillet test to have a high degree of interexaminer reliability. If it were unlikely that many of them would agree, we would say that this test has a low rate of interexaminer reliability.

Ideally any evaluation procedures should have a good level of inter-examiner reliability so we can rely on the information from the procedure. Unfortunately many of the palpation tests that are used to evaluate SIJ don’t have a high rate of interexaminer reliability. In addition to that, a number of these procedures seem to produce a high rate of false positives in an asymptomatic population. 1 In the chapter from the Vleeming text just cited, M. Laslett also mentions that in addition to having a poor rate of interexaminer reliability there is another significant concern that must be addressed. Even if there does appear to be a motion restriction, no clear causal connection has been identified between increased or decreased range of motion at the SIJ and pain complaints in the region. While there may appear to be some correlation, a direct cause-effect relationship has not yet been clinically validated.1

A number of authors have investigated various pain provocation tests for the SIJ to determine the inter-examiner reliability.  Several recently published reviews of the sacroiliac joint evaluation tests found a combination of tests to be more accurate than any one single evaluation procedure.2,3  The most accurate of the procedures that were evaluated appear to be two tests that focus attention on the role played by the anterior and posterior sacroiliac ligaments in SIJ dysfunction.3,4 Two procedures with the greatest level of interexaminer reliability were the gapping test and the side-lying compression test.

The gapping test is a procedure done with the client in a supine position. The practitioner places his/her hands on the client’s ASIS and presses them in a lateral direction (see Figure 2). The laterally directed pressure on the ASIS pulls the anterior aspects of the two pelvic bones apart and stretches the anterior sacroiliac ligaments. If these ligaments are damaged and causing SIJ pain, the pain is likely to be reproduced with this motion. This test may also apply pressure to the posterior joint surface on each side. 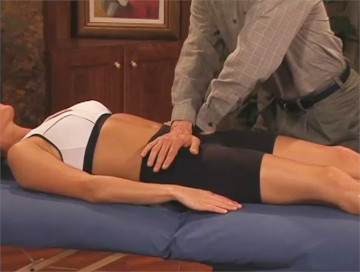 Figure 2
The gapping test which emphasizes the anterior sacroiliac ligaments

The side-lying compression test is a procedure that puts additional compressive loads on the sacroiliac joint to see if the joint surfaces are irritated. The client is in a side-lying position on the treatment table. The practitioner places both hands on the lateral aspect of the ASIS and puts pressure down toward the treatment table (Figure 3). This motion compresses the sacroiliac joint surfaces and if they are not aligned properly it will reproduce the client’s pain. Both of these procedures are useful to identify ligamentous damage and/or joint surface irritation, but are not accurate in discriminating between the two sources of pain. 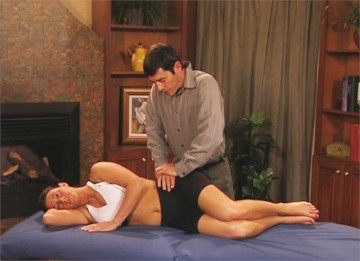 If information about a clinical complaint is based on a certain assessment procedure it is valuable to know if that procedure has a reasonable degree of accuracy. It appears that many of the different procedures for SIJ dysfunction, while often used by practitioners, may not have a high degree of reliability. Therefore, it is a good idea to use these procedures with caution and not rely on them as a clear determination of a client’s problem. Based on the information in these studies, it appears that the gapping and compression tests are most accurate, especially when used in combination with each other.

View all posts by Whitney Lowe →
Is it Time to Reconsider Cryotherapy?
Understanding Shoulder Separation