The November/December issue of Massage and Bodywork magazine concludes the two-part series I wrote on miserable malalignment syndrome (MMS) (click here to view the article). To recap, MMS involves a series of interrelated biomechanical dysfunctions throughout the lower extremity kinetic chain including: a broad pelvis, a large Q angle, femoral anteversion along with a squinting patella, genu valgum (knock knees), and excessive pronation with internal tibial rotation. Be sure to review the previous article in the series for the condition details, though I review some of them here.

Clearly some components, such as the broad pelvis or femoral anteversion, are issues of skeletal structure over which we have no control. Yet, structural problems frequently produce soft-tissue compensations or problems. Soft tissues are stressed by the attempt to correct biomechanical dysfunction, and for these concerns massage can be very helpful.

When there are structural problems that involve bony alignment it can be very difficult, or in some cases impossible to change the structure. So if the structure can’t be changed, what is the treatment goal of massage? A great way to look at this is by examining some aspects of knee alignment that are key components of the miserable malalignment syndrome.

One of the more common effects from the MMS is anterior knee pain resulting from incorrect patellar tracking. A tracking disorder is a problem that occurs when the patella does not move straight up and down between the femoral condyles during flexion and extension movements. In most cases the patella is being pulled in a lateral direction. This imbalance of forces on the patella can cause anterior knee pain during locomotion and especially when climbing or descending stairs, bending, or stooping.

A large Q angle, femoral anteversion, and squinting patella can cause the patella to be pulled more in a lateral direction. Let’s briefly recap what makes up these components of MMS.

Large Q angle: The Q angle is measured by drawing an imaginary line between the tibial tuberosity and the midpoint of the patella which continues in a superior direction. The angle between these two lines is called the Q angle and is a measure of how much the femur angles in a medial direction from its proximal end to its distal end (Figure 1). An excessive Q angle is considered to be more than 200 in women and 150 in men. 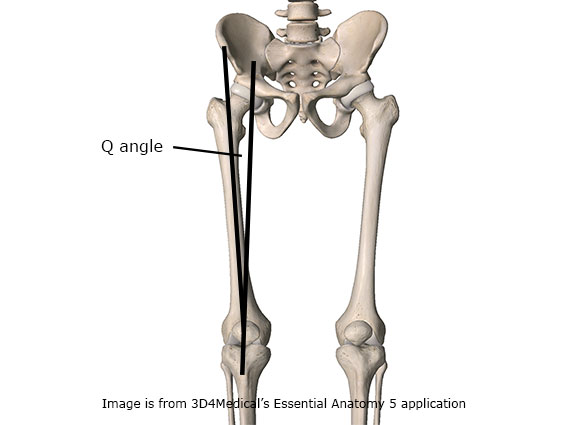 Femoral anterversion: Anteversion of the femur refers to the amount of twisting or torsion that is present in the femur, with the lower portion of the femur appearing more medially rotated than the upper portion. It is best observed by comparing the angle of the femoral neck relative to the condyles of the femur (in relation to the coronal plane) (Figure 2). 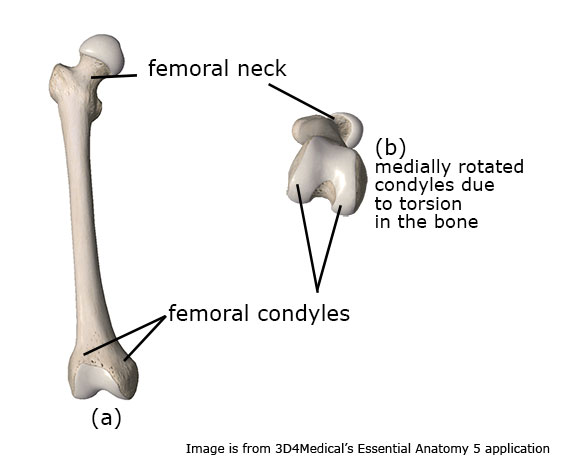 Squinting patella: A natural result of femoral anteversion is what is called the squinting (or winking) patella. When the distal portion of the femur is medially twisted, the top surface of the patella no longer faces in a straight anterior direction. Instead it faces somewhat medially (Figure 3), and the forces on the patella pull it more toward the lateral side. 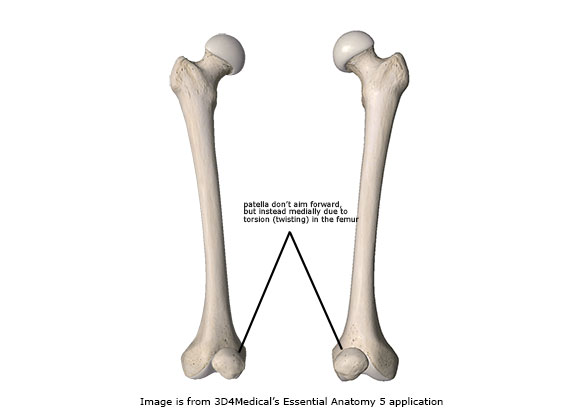 Each of these three key components are major structural issues that are very difficult to change. However, they may play a prominent role in causing anterior knee pain because of the tracking disorder. We are now learning a lot more about how pain is generated in the brain and this can help us look at these structural disorders in a new light.

Many people have structural challenges like those mentioned in miserable malalignment syndrome and have no pain at all. Consequently it is safe to say that the presence of a structural alignment problem is not a guarantee that pain will result. In addition, it seems appropriate to shift attention from trying to ‘fix’ these alignment problems, especially because many of them cannot be resolved through soft-tissue intervention.

Instead, our attention can focus on how massage can aid in pain management. The role of the massage practitioner in these types of cases shifts from one of a fix-it or repair person two more of an educator. The massage intervention as education comes from a different perspective than the traditional role that many of us were taught.

When massage techniques, and especially those that don’t increase pain, are applied to painful areas it essentially works by decreasing intensity of the noxious input from the nervous system. By decreasing the irritant sensory signals, we are essentially creating a new pattern in the client’s brain for what those tissues can feel like.

It is that important to reinforce gentle and easy movement in that region after soft-tissue work to continue facilitating or educating the brain and nervous system about how these areas can feel. This process of facilitation is quite different than the approach of trying to squeeze or press the pain out of muscles that many of us were taught.

There is an important takeaway from looking at these structural problems and how our treatment approaches may change or evolve. The same processes can be applied to numerous pain complaints in all regions of the body. The next time you have a client with a significant pain complaint, try shifting the frame of reference from digging the pain out of the client’s body to an approach of gently finding ways to reduce the pain and then reinforce that change in neural patterning through gentle pain free movement. It is likely that this will be a more lasting process than the short term gains that come from many of the other current approaches you might be using.

Reconsidering Hip and Iliotibial Band Pain
Valgus, Varus, Vargus… What is It?