A look at the hallux valgus deformity, also known as the bunion, as well as the key biomechanical causes and potential treatment strategies.

What is hallux valgus?

No doubt you’ve seen one, or perhaps many, clients with hallux valgus. Some may not know this common postural deformity by its technical name, but instead refer to as a bunion (Figure 1). The technical term is important, though, as it gives insight into the key biomechanical causes of the deformity. An improved understanding of hallux valgus helps us design the most appropriate treatment interventions involving massage. 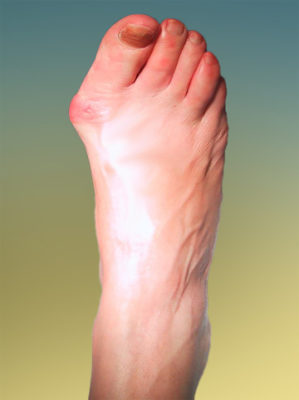 Despite its prevalence, there is still debate about what causes hallux valgus. Some advocate that it is purely a structural condition caused by narrow shoes. Others say it is a genetically inherited condition, also aggravated by footwear. Newer biomechanical studies have further clouded the picture by suggesting this condition is not the result of just shoes or genetics, but is in fact influenced by complex dysfunctional foot mechanics.

For some time the most prevalent cause of hallux valgus was thought to be the wearing of narrow toe box shoes. Epidemiological studies show females in Western countries wearing fashionable shoes with a narrow toe box, especially high heels, are the most likely to develop this deformity.1 Clearly, there is a correlation between certain types of footwear and hallux valgus.

High-heeled shoes cause increased pressure on the metatarsal heads because greater amounts of weight are born by the distal forefoot (balls of the feet). High-heeled shoes cause the foot to be jammed down into the front of the shoe. Because the front of the shoe narrows significantly, it is natural to suggest that the distal end of the toe would be pushed in a lateral direction, giving the hallux a valgus angulation.

Additionally, many (if not most) of our contemporary shoes in North America have narrowed toe boxes. Most shoes narrow to some degree at the toe, not just the high heel. Even athletic shoes have this design (they also go up at the toe, another issue for another article). The issue of shoe wear remains a key issue; however, new research indicates additional factors that could help choose treatment options for this condition.

There is evidence that excessive mobility of the first ray plays a dominant role in the development of hallux valgus. The first ray is a structural segment of the foot composed of the first metatarsal and the medial cuneiform bone (Figure 2). The first ray is more mobile than the other segments of the forefoot and has a crucial role in maintaining the medial longitudinal arch and governing the proper amount of foot pronation. 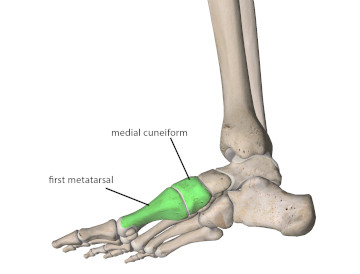 Many individuals with hallux valgus have excessive mobility at the junction between the first metatarsal and medial cuneiform bone. Increased mobility at this joint also occurs in people having a collapsed or fallen medial longitudinal arch or who overpronate their foot during gait. Individuals having a fallen arch or who overpronate put increased weight on the medial edge of the foot. As the medial edge of the foot bears more weight, the medial cuneiform pushes the base of the first metatarsal in the opposite direction (laterally) forcing the distal head of the metatarsal in a medial direction. As the distal head of the metatarsal is forced medially it causes the base of the hallux to move with it in a medial direction. This movement makes the distal end of the hallux move laterally producing the hallux valgus deformity (Figure 3).

There are indications that heredity plays a role in the development of hallux valgus. Consequently it is likely that some of these biomechanical stresses are compounded by hereditary structure and tissue composition. One study found evidence of medial collateral ligament weakening at the first metatarsophalangeal joint.2 The weakening of this ligament structure makes it less resistant to the forces pushing the metatarsal head and hallux out of position. This tendency might be passed on genetically and be one factor that increases the condition’s incidence within familial lines.

Another study found variations in the insertion points of several lower extremity muscles, including extensor hallucis longus. They found that some of these variations have a high correlation with hallux valgus.3 This may indicate that the pulling forces of muscles inserting on locations slightly different than normal could be a contributing factor to the hallux valgus distortion. It is likely that some of these anatomical variations may also be genetic and play a role in the genetic components of this condition.

Wearing of high-heeled shoes is strongly correlated with the development of hallux valgus. But it may not be just the narrow toe box that’s contributing to the disorder. Long periods in high-heeled shoes cause progressive shortening of the plantar flexor muscles and that decreases overall foot dorsiflexion. Loss of flexibility in the plantar flexor muscles adversely affects tension on the plantar fascia and has detrimental effects on mobility of the first ray because of fascial connections between the first ray and plantar fascia.

Other lower extremity disorders are frequently correlated with hallux valgus. In some cases they are contributing to the cause while in others they may result from it. Hallux valgus is strongly correlated with overpronation, and the combination can become a vicious cycle of dysfunction. Not only does overpronation increase the likelihood for hallux valgus development, the loss of hallux alignment increases overpronation even further. One of the primary roles of the hallux is to prevent excessive pronation during the push-off phase of gait. If the distal end of the hallux is deviating laterally, it does not have the force capability to resist increased foot pronation leading to further overpronation.

Losing the hallux as a primary resistor of overpronation can have other detrimental effects. There are strong correlations between hallux valgus deformity and shin splints, plantar fasciitis, tarsal tunnel syndrome, and other lower extremity disorders. The dysfunctional foot mechanics that developed with hallux valgus causes increased force loads in the lower extremity that must be absorbed by other soft tissues, causing them to be overloaded. In many cases symptoms of these other foot disorders may be addressed, but the underlying biomechanics that led to them may frequently go untreated.

Bunions are often a painful, and sometimes debilitating condition. Treatment options are few and surgical intervention is not guaranteed as a solution. We tend to develop treatment approaches based on the most evident postural or biomechanical alteration. Noting in this condition that the distal end of the hallux is deviating in a lateral direction, numerous treatment strategies focus on trying to pull the distal hallux back in a medial direction. Sometimes this is done surgically, but it is also attempted through soft-tissue work such as vigorous stretching, orthotics, or biomechanical interventions.

These approaches may have some degree of effectiveness. If the dysfunctional condition is resulting from genetic weakness in the medial collateral ligament combined with mechanical forces that are pushing the bones out of alignment, simply pulling it back towards neutral might not be sufficient to cause more lasting change.

Correcting overpronation and other problematic foot mechanics is important for long term solutions and orthotics can play an integral therapeutic role. Moving to shoes with a wide toe box, such that the toes can easily spread out all the way to their distal ends is key (clogs often have wide toe boxes). To test appropriate width for the client’s toes, remove the liner from their shoe and have them stand on it. If their foot is wider than the liner and/or the toes land outside the liner in the toe box area, the shoes are too narrow. There are toe spacers available that can be used to encourage the toes to spread out (these must be introduced very slowly, a few minutes at a time until the toes adjust (Figure 4). 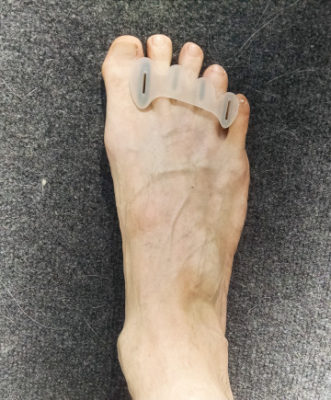 The massage therapist can play a helpful role as well in addressing this condition by managing tensions in the soft tissues throughout this region. Of particular importance is treating the plantar flexor muscles and the other soft tissues on the plantar surface of the foot, which can decrease the detrimental forces that lead to or aggravate this deformity. Working the entire kinetic chain (calf muscles and hip adductors for example) can play critical roles in treating a variety of foot conditions. Stretching and range-of-motion activities performed at home are also important.

Sometimes it’s not easy to unravel the complex biomechanical patterns that lead to dysfunction. When you see a client that has a visible alignment problem with hallux valgus, consider the soft tissues and mechanical factors that may be contributing to local problems in the foot and perhaps other disorders that result from the dysfunctional mechanics. Make sure to address all of those factors in your treatment to decrease the likelihood that further complications develop from this common disorder.