By Whitney Lowe on April 23, 2021 in Uncategorized

An explanation of the term Axis of Rotation pertaining to the body and how it enhances understanding of muscle action in our clinical practices.

Each day we move our limbs through thousands of movement patterns without considering the fascinating mechanics that make this movement even possible. Our movement is accomplished via muscle contraction, which, by way of tendons, transmits the muscle’s force to bones. If a bone was free to move in space and had a muscle attached to it, the bone would slide straight in the direction of the muscle attachment when the muscle contracted. This sliding movement is called translation. However, bones of the skeleton are not free to move in space. They are tethered in various locations by tendons, ligaments and other connective tissues. Because of these other connections, the muscle’s pulling force causes a different type of movement.

When a rigid structure rotates around a fixed point, rotary motion occurs. So, when a pulling or pushing force in the body is applied to a rigid structure, and that structure is tethered in a separate location, then a rotary motion results. The point around which the rotary motion occurs is called the axis of rotation (Figure 1). The farther the muscle attachment is from the axis of rotation, the greater is the force that can be generated by that muscle. A great example of this is with chimpanzees, who are significantly smaller than us in overall body weight but far stronger in their upper arm strength. For them, the arm is a limb of locomotion and their elbow flexors attach farther down on the forearm than ours do. As a result, they have incredible strength in their upper arms to move themselves rapidly through the trees. 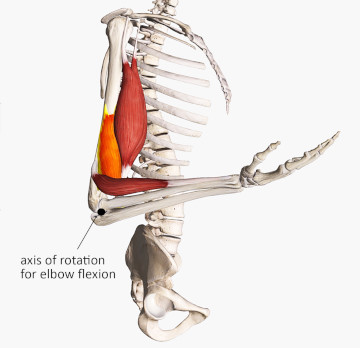 If you are in the midst of a clinical session and you need to determine a muscle’s action so you can stretch it or actively engage it, you can do this if you know the location of the muscle and its approximate attachment sites. For example, look at the peroneal tendons on the lateral side of the ankle in Figure 2. Since these tendons travel posterior to the ankle’s axis of rotation, they produce plantar flexion at the ankle when they contract instead of dorsiflexion. Because of their location posterior to the axis of rotation, a movement of dorsiflexion at the ankle will stretch these tendons. 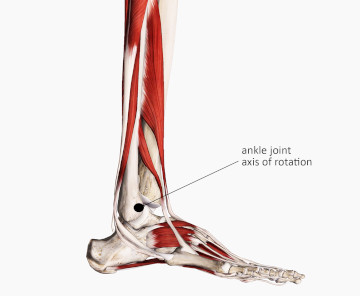 The example here of the peroneal tendons may seem a bit odd because they are not often considered primary plantar flexors. They are most commonly considered evertors of the foot. However, there is more than one axis of rotation for ankle movements. At one joint dorsiflexion and plantar flexion occur, and at a separate joint inversion and eversion occur. Our reference here was to the talocrural joint (between the talus and tibia) and this is where plantar flexion and dorsiflexion occur.

It would be wonderful, in terms of understanding muscle actions, if muscles in the body only had one action, but that simply isn’t the case. Most muscles have more than one action and that can make understanding their function in relation to the axis of rotation a little more challenging sometimes. A great example is with the sternocleidomastoid (SCM) muscle.

The SCM and its axis of rotation at the atlanto-occipital (AO) joint are illustrated in Figure 3. Looking at this muscle from the side you can tell that it is likely to produce extension of the head at the atlanto-occipital (AO) joint when the muscle contracts, as the mastoid process will be pulled closer to the sternum. If you consult many anatomy books you will see the action of the SCM listed as a flexor of the head and neck. Yet its attachment posterior to the axis of rotation at the AO joint clearly shows that it will produce extension and not flexion of the head if working at the AO joint alone. 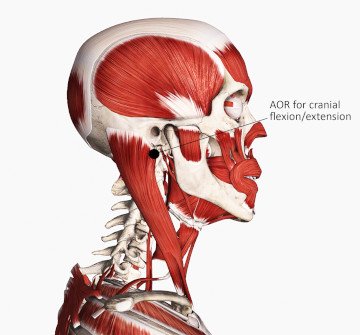 Because the neck is composed of several independent vertebrae that all have motion occurring at their individual segments, the AO joint is not an independent axis of rotation at the end of a lever (the neck). The arrangement you have here is more like a lever that has seven different segments, and each of these segments may also move.

The main reason the SCM helps produce flexion is that it is not usually working alone. If it is working entirely alone and the neck is rigid, then extension of the head at the AO joint would result. However, if any of the other neck flexors are engaged, the segments of the neck are pulled anteriorly and the SCM will assist them in producing forward flexion of the head and neck together. At this point the axis of rotation is no longer just at the AO joint, but there is a separate axis of rotation between each of the individual cervical vertebrae. Therefore we see that the action of the SCM is not easy to declare, as it really is dependent on which other muscles are being engaged at the same time.

From a clinical perspective understanding some of these complexities of muscle action will be particularly important. For example, as you are attempting to determine the best way to stretch a multi-articulate muscle like the SCM, after you have been working on it with massage treatment, you can use your understanding of its multiple actions and axes of rotation to determine the best positions for applying tensile stress to the muscle and getting the most effective stretch. It is these principles that will help kinesiology become a fascinating part of your work and not just some academic discipline that is separate from your on-going clinical practice.