A look at Cruciate Ligaments, common issues that arise, as well as treatment strategies and the role of massage.

The knee is the largest joint in the human body. And it is also a common location for injury, usually due to ligament damage. The reason for this is that the lower extremity skeletal structure is inherently unstable. If you consider how the bones are arranged for normal standing, walking and running activities, it is easy to see how unstable the joints are between these bones. For example, at the knee there are essentially two long-shafted bones standing end to end. The entire upper body weight must remain balanced over these small contact surfaces, a challenging task especially with the body in motion.

The lower end of the femoral condyles are rounded. These rounded edges sit on top of the tibial plateau. While the rounded surface provides a much smoother contact for the rolling motion during flexion and extension, it decreases the amount of actual contact between the tibia and femur. A greater amount of contact is valuable for spreading out the compressive load of body weight. As a result of minimal bony contact, soft tissues play a much larger role in joint stability.

Numerous soft tissues such as the quadriceps, hamstrings, joint capsule, tendons, and meniscal cartilage provide stability for the tibiofemoral (knee) joint. However, the main work of maintaining stability in the knee joint falls to the supporting ligaments. There are four primary stabilizing ligaments of the knee. In this issue we will take a look at two of these, the anterior and posterior cruciate ligaments, which are the two deepest ligaments at the center of the knee joint. These ligaments play a major role in proper knee function, and are routinely susceptible to sprain injury.

The term cruciate is Latin for “shaped like a cross.” The two ligaments are aligned in opposing directions and cross inside the knee to maintain anterior and posterior stability of the knee. Let’s take at the anterior cruciate ligament first.

The anterior cruciate ligament (ACL) is widely known because it is so frequently involved in knee injuries. Its inferior attachment is on the anterior intercondylar surface of tibial plateau. Its superior attachment is on the posterior part of the medial surface of the lateral femoral condyle (Figure 1). It may seem challenging to remember these specific attachment points but what is most important is simply to remember that the ACL goes from the anterior aspect of the tibia to the posterior aspect of the femur. 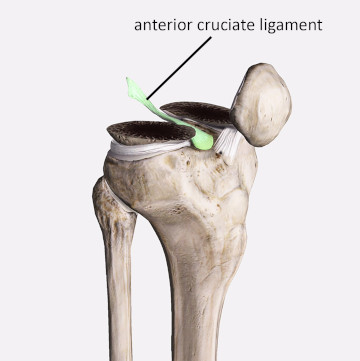 It is also helpful to remember that this ligament becomes taut when the tibia is pulled in an anterior direction. Therefore, its primary function is to resist anterior translation of the tibia in relation to the femur. Just remember this simple formula: ACL = attached to the anterior tibia + resists anterior movement of the tibia.

Another primary function of the ACL is to prevent excessive medial rotation of the tibia in relation to the femur. These rotational stresses occur most often when the foot is planted and the body is turned toward the side of the planted foot (right foot planted, body turns to the right). Many sporting activities involve rapid change of direction where these rotational joint stresses occur.

The more common cause of ACL injury is excessive anterior force to the tibia. One way that an anterior force impacts the proximal tibia is if a person is hit on the back of the calf, which then thrusts the tibia in an anterior direction. However, that is not the most common cause of excessive anterior tibial force. Many ACL injuries occur from rapid or high-force deceleration such as running and then suddenly stopping, which requires the quadriceps group to contract with a strong enough force to slow the body’s momentum. Because the quadriceps are attached to the proximal tibia, they exert an excessive pulling force on the proximal tibia in an anterior direction. This same high force load often occurs when landing from a jump.

Epidemiological studies have indicated that women are more susceptible to ACL injury than men. It appears that a number of factors may play a role in this discrepancy. In women there is less space inside the joint and that can sometimes cause irritation of the ligament as it is pressed against other internal joint structures during knee movements. Some studies have found an increased incidence of hamstring recruitment during various activities in men compared to women, which resists anterior tibial translation and provides additional knee stability.

The ligament itself is also frequently smaller in women and therefore higher force loads may overwhelm the smaller ligament structure. Knee alignment is also a factor and the increased Q angle in women has been linked to a greater incidence of ACL injury. Q angle refers to the degree to which the femur deviates toward the midline in relation to a straight vertical line (Figure 2). Presence of genu valgum (knock knees) is also a factor that leads to increased incidence of ACL injury, and is a postural dysfunction more prevalent in women than men as well. 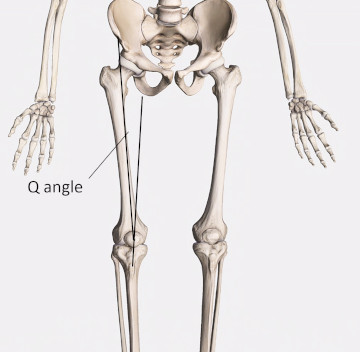 As might be expected the posterior cruciate ligament (PCL) has a role just opposite that of the ACL. The lower (inferior) attachment is on the posterior intercondylar surface of tibial plateau. The upper (superior) attachment is on the anterior part of the lateral surface of the medial condyle of femur (Figure 3). As you can see the ACL and PCL create a cross inside the knee joint. 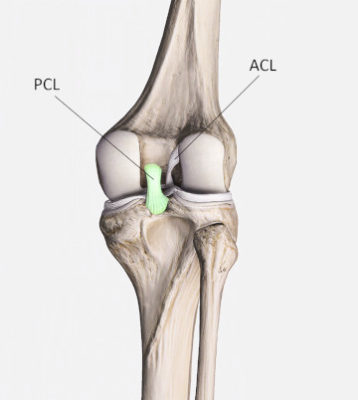 The primary function of the PCL is to prevent posterior translation of the tibia in relation to the femur. A similar formula can be used to remember PCL function and location:  PCL= attached to the posterior tibia + resists posterior movement of the tibia. There are fewer injuries to the PCL than to the ACL mainly due to ligament structure and the fact that we are more frequently moving forward (anterior direction) so the ligament that is trying to restrain or decelerate forward motion takes on a greater role.

Due to its anatomical architecture within the joint, injuries to the PCL occur most often when the knee is significantly flexed or fully extended as these positions put the ligament under the greatest tensile load. The most common cause of injury to the PCL is referred to as a dashboard injury. This injury occurs when an individual is in the passenger seat of an automobile that has a head on collision. The person is thrust forward and their proximal tibia slams into the dashboard, which forces the tibia back in a posterior direction. A similar force occurs when a person strikes their tibial tuberosity on something hard.

Treatment Strategies and the Role of Massage

Injuries to the ACL or PCL are generally treated the same. If the sprain is mild to moderate, (usually falling into the categories of grade 1 or grade 2), treatment will focus on physical therapy to regain stability as the ligament heels. If there is a sprain to the ACL, there will be greater emphasis placed on strengthening the hamstring muscles as they aid resistance against anterior tibial translation. For a PCL sprain there will be emphasis on strengthening the quadriceps muscles as they work in conjunction with the PCL to resist posterior tibial translation.

In more severe sprains surgery may be required to repair the damaged ligament. Even though the ligaments lie deep within the knee joint surgical repair of the cruciate ligaments has advanced dramatically and the patient can achieve a much quicker return to function. Exactly how long it takes to get back to activity will depend on the severity of the injury and what type of activity the person is trying to regain. Obviously it will be easier to get back to normal walking than it will to competitive athletics. Even then, the return to sport can occur in just a couple months in many cases.

Of course, a primary question that comes up for massage therapists is what role massage can play in addressing cruciate ligament injuries. In many cases massage is very helpful in addressing ligament sprains.  Deep friction applications encourage tissue healing and help manage scar tissue in the repair process. Of course, that strategy is not applicable to ACL and PCL injuries because the ligaments lie deep within the knee joint and are inaccessible to palpation.

While these ligaments are inaccessible it does not mean that massage is of no benefit in treating cruciate ligament injuries. One of the key adverse events that occurs as a result of ligament injury is a disturbance of proper biomechanical coordination around the joint. This biomechanical dysfunction can often involve muscle tightness and lost range of motion as muscles attempt to overcompensate for instability. This is where massage can play a key role in cruciate ligament rehabilitation.

The massage therapist that uses a wide variety of techniques to focus on the hamstring and quadriceps muscles and surrounding connective tissues can help maintain optimum neuromuscular balance throughout the healing process. Balance and motor control are a complex system, and massage can help in pain reduction and neuromuscular reeducation throughout the healing process. Massage can also be helpful in reducing tightness or any adverse tissue reactions that may occur as a result of physical therapy or other treatment techniques. A good understanding of these common knee ligament injuries allows you to become a much more valuable member of your client’s healthcare team.